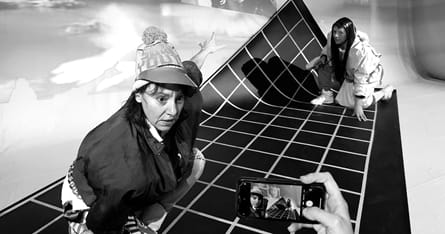 Selected as one of the highlights at CPH STAGE 2021

The internationally acclaimed art collective Gob Squad is now coming to Denmark.
It’s 1984 and the Cold War is in full swing. The Americans have invented a powerful new weapon: the music video. Gob Squad travel back in time to confront themselves as teenagers, the principal targets of this media revolution. They find themselves fearful of nuclear war, enthralled by pop videos, uncertain of who they might become. As the performers remember themselves and reconstruct the media fantasies of that time, they also start to dismantle what may have been written into the programming code underlying this colourful world of commercial pop. Can they re-programme their own story?