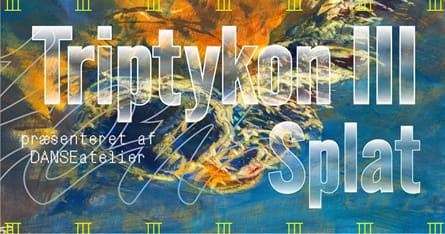 TRIPTYKON III – Splat is a mash up of three different works made by Emilia Gasiorek, Karis Zidore, Olivia Rivière, Stine Frandsen and Alice Martucci. The original works have different temporalities – Lowlands premiered in 2021, Shriller will premiere in 2022 and Dora Stays is a choreography in its initial phase of formulation.

Together we explore what happens when these works pass through other bodies, are thrown around and fall. Splat! A solo with seven voices, two duos change their skin. We explode the original material and draw out their essence. States and sequences are twisted into a common lamentation, irrational rhythms and a thick mumbling that shivers under its surface.